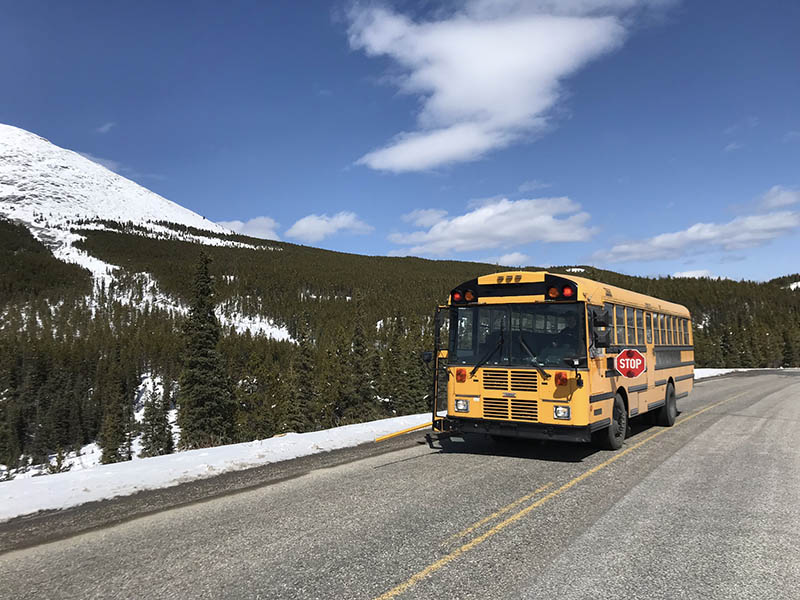 We Bought a School Bus!

It sure is easy to get stuck in life’s daily routines. For years. We’ve managed to extract ourselves from time to time, our recipe this time was to buy a bus! Kelly and I had bounced this cockamamie idea around quite a bit the last few years. No more bouncing, we actually own one now. Contrary to what a few of the neighbors might believe, our goal has nothing to do with lowering their property values. For me it’s more about having a fun, long term project that the family can participate in. Outside of Zach, who is currently somewhere in the US cruising in the folks’ RV, everyone has already taken part. The idea of converting a school bus into to a livable space is far from original. It’s not a mainstream project, but there are plenty of resources available to pull ideas and methods from. Check out Skoolie.net if you’re curious. For those of you that “know” buses, it’s a ’04 Thomas Saf T Liner MVP FE, with a CAT 3126 & an Allison 2000 automatic transmission. All the lights, stop sign & safety bar work.  What are we going to do if we actually see it through? Probably camp, travel, live….maybe AirBnB it. Who knows…it’s difficult for me to look that far ahead with a project like this. Ask Kelly, she’s the planner.

I’m gonna try to keep a photo/video/written diary of the conversion here. My guess for final completion is spring 2020. Someone in that Skoolie forum mentioned that converting a bus with your wife will test the strength of your marriage. Pretty sure I’ve done that a few times before…not too worried about that lady leaving me because I prefer a bucket over a real toilet.  We did get a little spun up over how much demo/build she & the kids will do when I’m out on the tug this summer.  My suggested solution to that little spar was simple…lets buy another one. A his version and a hers version.

Enough of the sarcasm. We bought the bus out of Nine Mile Falls, WA, so I flew down about 10 days ago to drive it up. Huge thanks to Wayne & Colleen Ronek who provided a fantastic meal & a comfy bed before crossing the border. Wayne climbed aboard as my driving buddy. We covered about 2400 miles over 3 days. No breakdowns! This bus is pretty solid. I’ll leave it to the photos for the rest. Until next time…which may be 2020. Inspecting the bus for gremlins in southern BC. Kicking back somewhere near Banff, BC. My best Pop impersonation, at a truck stop in Grand Prairie, Alberta.

Stopping for children somewhere in the Canadian wild. It was easier & faster to grind the inside bolts off. Alex was not sure about our bus plans… …until I gave him a power tool. She does all the work…I just take pictures. That’s a dumpload of seats! Floor is out, walls and ceiling next!